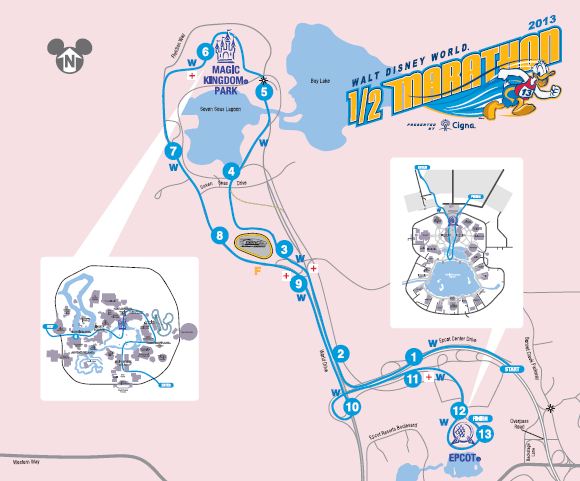 The Walt Disney World Half Marathon and the RunDisney Princess Half Marathon follow essentially the same course from Epcot to the Magic Kingdom and back. Here’s an overview of the entire course:

Runners can download their race waivers & find out their bib numbers here:  http://www.trackshack.com/disneysports/wdw13waiver/verify.php

Corrals will be organized by estimated finish time.

The start is on Epcot Center Drive.  There will be a water stop just before the first mile marker.  By mile 2, runners will be on World Drive and heading for the Magic Kingdom.  Many spectators like to gather & cheer in the first mile as runners are just getting started.

Mile marker 5 will be just before entering the Magic Kingdom and Mile 6 marker will be near Pecos Bill’s in Frontierland.  In between those will be the magical moment of running through the castle!  Runners will enter Main Street, USA between Chapeau and Tony’s Town Square, head up Main Street, turn right down the Tomorrowland bridge, then left in front of the Tomorrowland Speedway.  After running through the castle, we’ll make a sharp right turn to go across the Liberty Square bridge, through Frontierland, and exit the Magic Kingdom by Splash Mountain.  Another water stop will come shortly after exiting the Magic Kingdom.  Spectators are allowed on Main Street and in the hub.

Mile marker 7 and another water stop will be in front of the Grand Floridian, then we’ll head back to World Drive via the Magic Kingdom exit route.  Some hardy spectators will make it to the front of the Grand Floridian and Polynesian.  Clif Shots will be handed out just before mile marker 9 and a water stop will follow shortly after.  We’ll run another mile on World Drive and by mile 10, take the ramp to go back to Epcot.

Miles 11 & 12 will bring runners back to the front of Epcot.  There will be a water stop just after mile 11.  Many spectators like to line up here to cheer for their runner instead of at the finish line.