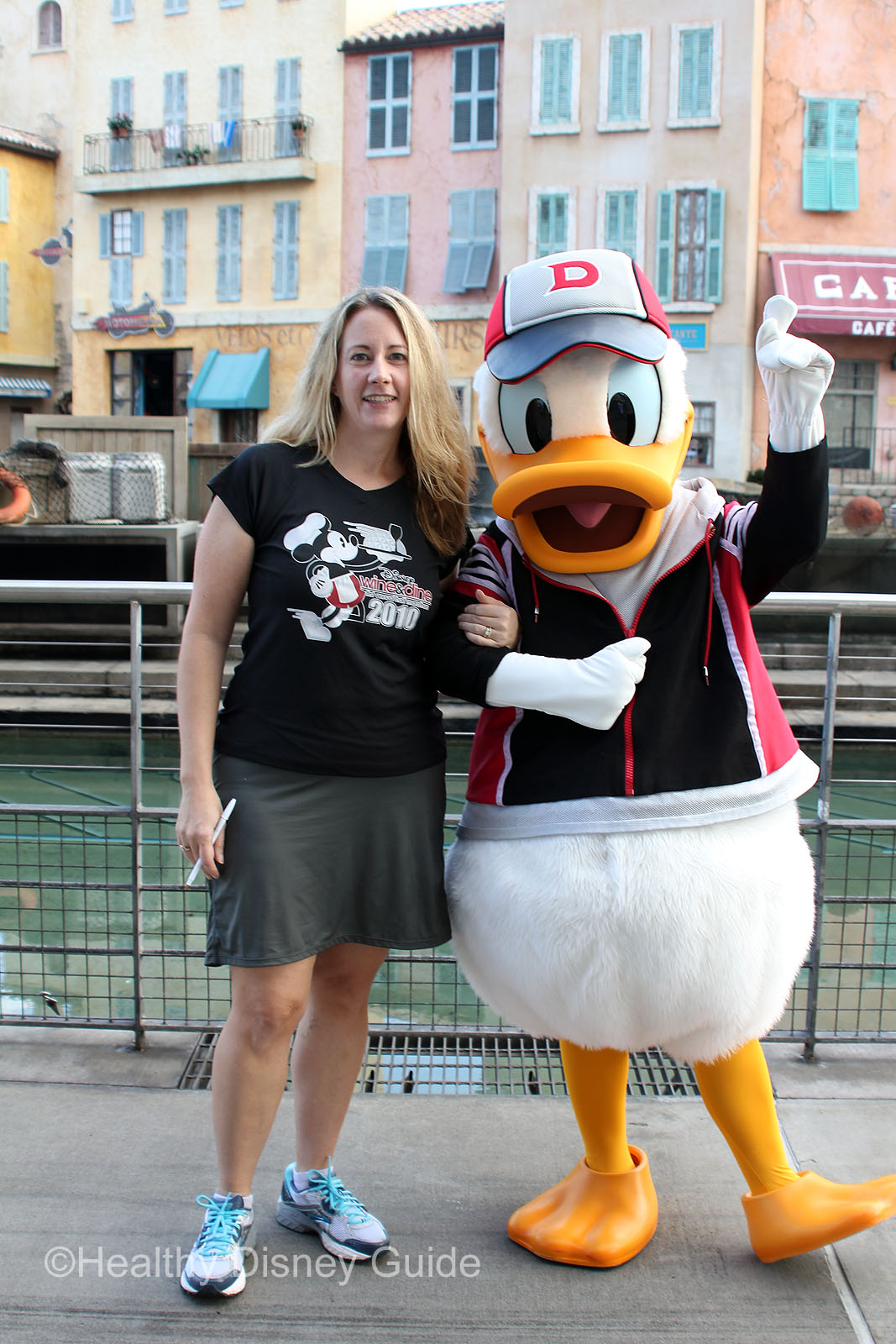 The Disney Parks Blog posted their description of the event and called for RSVP’s.  RunDisney enthusiasts across the world jumped into action and then anxiously awaited a notification that they had been accepted.  Within a few hours, it was all set, over 100 runners and members of the media were notified they’d be attending the special meetup and I was thrilled to be included!

The upcoming early morning event, planned for Friday, January 11, will feature several well-known former endurance stars, as well as Hollywood celebs, to help get everyone ready for the big weekend.

One of the celebs planning to attend is singer, dancer and actor, and now runner, Joey Fatone, who is taking on the Goofy Race and A Half Challenge. Fatone was a late addition to the weekend lineup of celebrities running Disney.

Meetup attendees were asked to check in at Disney’s Hollywood Studios by 6:30 AM on Friday, January 11.  This meant that runners could not participate in the Family Fun Run 5K and the Meetup.

I got up & ready and took our rental car from Beach Club Villas to Disney’s Hollywood Studios, arriving around 6:15 AM.  I was concerned because RunDisney had emailed a parking pass around 3:30 PM the day before.  I couldn’t print the pass because I was already at the airport when the email arrived and the line at the Guest Services desk was a mile long when we checked in at 9 PM with bags, groceries, and two tired kids who needed dinner.  Turns out there was no one checking for passes and I had worried for nothing.

I checked in with the RunDisney crew, signed a waiver, photo release, and was given a Disney Parks shopping bag that had a t-shirt inside.  Sadly, the shirt was not the sized I had asked for, but I didn’t notice this until much later.  I put on the cotton t-shirt over my tech shirt since everyone else had theirs on and I put the plastic bag in the trash.  Turns out I was supposed to put my personal gear in that bag for transport to the end of the run.  Ooops!  No one told me!

At the RunDisney Meetup for Wine & Dine Half Marathon 2010 and 2011, the character photos came at the end, Mickey, Donald, & Goofy appeared while we were waiting for the run to take photos!

One of my best running friends from home, Stacy, also attended the meet-up and ran her first marathon.

After everyone arrived, we divided into two groups for a run around Hollywood Studios.  One group took off at 9 minute miles with seven-time Disney World Marathon winner Adriano Bastos.  The other group used a 30 second: 30 second interval at about 12 minute miles with Jeff Galloway. I stuck to the second group, as did Bart Yasso, Dick Beardsley, and Joe Taricani from The Marathon Show.

The faster folks had a little more time for character interaction on the course, I think.  (this photo from Disney)

I’d like to think the slower group had a better time!  I had a chance to chat with Bart Yasso and Dick Beardsley while running.  Dick had never tried run/walk and was struggling a bit with the concept, especially the very short intervals.  He was interested to hear that I took 4 minutes off my half-marathon time, going from 2:18 to 2:14 on a hillier course simply by cutting from 4 minutes:1 minute intervals to 90 seconds:30 seconds at Jeff Galloway’s suggestion.

We finished the run at Lights, Motors, Action!  There was water, juice, coffee, and a food truck with breakfast sandwiches waiting for us.  As we settled ourselves in the stands, cameras & phones at the ready, the speakers began.  I finally had to take off the cotton t-shirt, it was just too warm &  humid to be wearing two shirts.

New Balance had representatives there to discuss all types of shoes, including the new Disney-themed shoes.  New Balance produced about 1000 pairs of these shoes, bringing half to marathon weekend and saving half for the Tinkerbell Half Marathon at Disneyland next week.  It’s obvious they underestimated the demand, because they sold out in just a few hours on the first day of the expo.  Several of the celebrities at the meetup were wearing them, including Jeff Galloway, who slipped his off to examine it closer as the New Balance video played.  Some of the shoes in LA were flown in to Orlando and put on sale about 2 PM Friday afternoon, but those quickly sold out too.  They did give away a few pairs to meetup attendees.

The great thing about these meetups is that everyone is encouraged to take photos, email, tweet, & Facebook everything that happens.  It’s really entertaining to follow the meetup hashtag on Twitter and see what everyone else is posting right in the moment.  Even Tara Gidus, the official RunDisney registered dietitian was tweeting away!

After that, our panel of runners took the stage.  Featured were official runDisney training consultant Jeff Galloway, Olympic Gold Medalist Joan Benoit Samuelson, New York and Boston Marathon winner Bill Rodgers, Runner’s World columnist Bart Yasso, TV host Dick Beardsley, and Olympic marathoner Desiree Davila.
Jeff Galloway showed off his perfect 20 Disney Marathon ring and said it was the only jewelry he’d wear in addition to his wedding ring.  94 other runners had run all 19 Disney Marathons leading up to this one and received rings.

I didn’t get a good photo of Des Davila, but all the panelist agreed she was currently the fastest amount them.  She’s nursing an injury and did not run.

Bart Yasso was a hoot!  He commented on what a drag it was to have speed workouts named after him, running a marathon in the nude, and running a marathon that included a glass of wine at every mile marker.  Now, that sounds like my kind of race!

Joan Benoit Samuelson was amazing.  Love that she mentioned thinking of her career in two phases, “BC and AD – before children and after diapers”.  I didn’t begin running until over a year after the diaper phase, I barely had the ability to get through the day when the twins were under 3, never mind run.

Former NFL player Eddie Mason was there representing Cigna and NFL Total Wellness Workout.  He spoke about core strengthening, reminding me it’s time to get back to pilates now that the marathon is over.

Joey Fatone from N’Sync decided to run the Goofy Challenge after his wife registered and was unable to run after injuring herself.  Joey did not run with us at the meetup but came rolling in on the Lights, Motors, Action! camera truck to speak.  He was entertaining, but I’m not sure how I feel about him running 39.3 miles on relatively no training.

The unannounced guest for the day was Drew Carey!  Drew was also injured and unable to run but came out anyway to cheer on those who were running.  Drew offered tips for how to win on the Price is Right and also admitted that he hated the Sounds Dangerous attraction as much as we all did.  He finds it very unfair that Aerosmith got a roller coaster and he got an attraction where guests received a fake haircut in the dark.

There were more chances for photos with characters and celebs before we left.  The lines for Joey Fatone & Drew Carey were very long.

I wanted to stay longer and talk to everyone, but needed to get to the expo so my boys could get their packets & run the Mickey Mile.  Everyone was given an awesome goody bag as we left.  It included an iFitness belt, H20 spa products, New Balance shoestrings, and a one day park ticket.  This was a fantastic experience and a great way to kick off Marathon Weekend!