It’s almost time for the 2015 RunDisney Walt Disney World Marathon.  Months of training, all leading up to this race, will finally pay off started at 5:30 AM on Sunday, January 11, 2015.

Here’s an overview of the entire course: 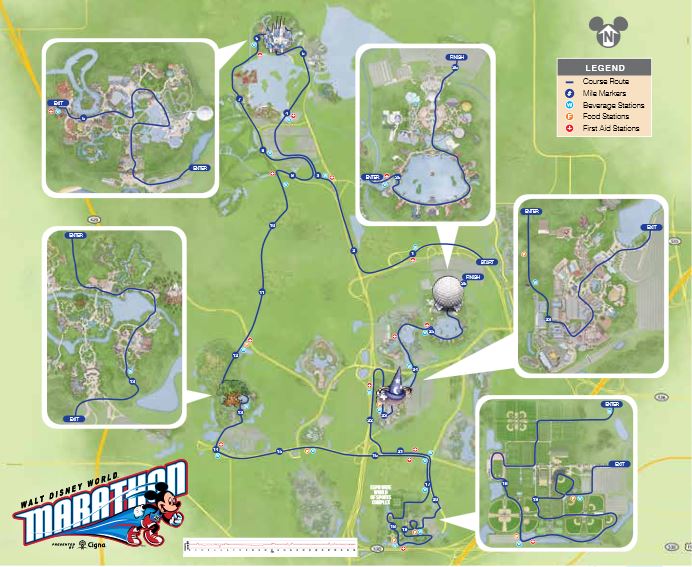 We’ll start on Epcot Center Drive and then take World Drive through the Magic Kingdom parking lot to the TTC, then around by the Contemporary before heading into the Magic Kingdom. After leaving the Magic Kingdom, we’ll run on Floridian Way past the Grand Floridian and the Polynesian, then head for the Walt Disney World Speedway. We’ll go around the speedway, then over to the Animal Kingdom. From there, we’ll head east on the Osceola Parkway to Disney’s Wide World of Sports complex.  Then we’ll run on to Disney Hollywood Studios, around the Boardwalk, through Epcot and to the finish line. There will be 19 beverage stops, featuring water and lemon-lime Powerade. There will be four food stops located along the course. Bananas will be available at Mile 11.5 and Mile 18.3. Clif products will be distributed at Mile 15.4 and Mile 19.4.  Sponges will be provided at Mile 17.1, and candy will be available at Mile 22.5.

Here’s a look at the pre-race staging area. All bags will be inspected by security as runners & spectators enter the pre-race area, so expect long lines here if you are bringing in any kind of bag. Runners will pass into the runner-only area through the gear check tents before beginning the long walk out to the corrals. 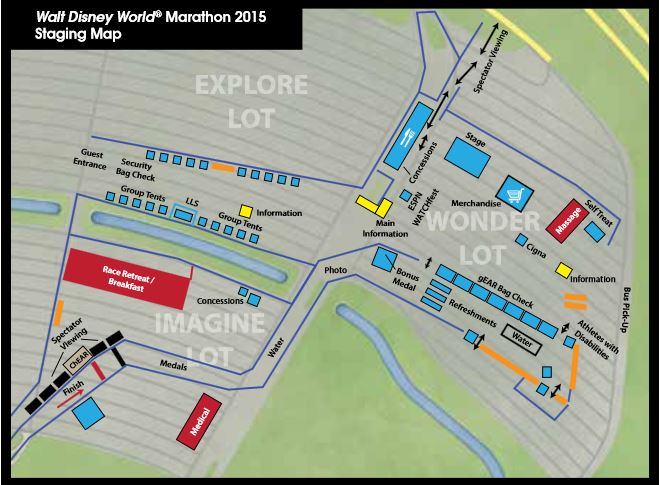 Runners can download their race waivers & find out their bib numbers here:  http://trackshack.com/disneysports/wworld15/verify.php 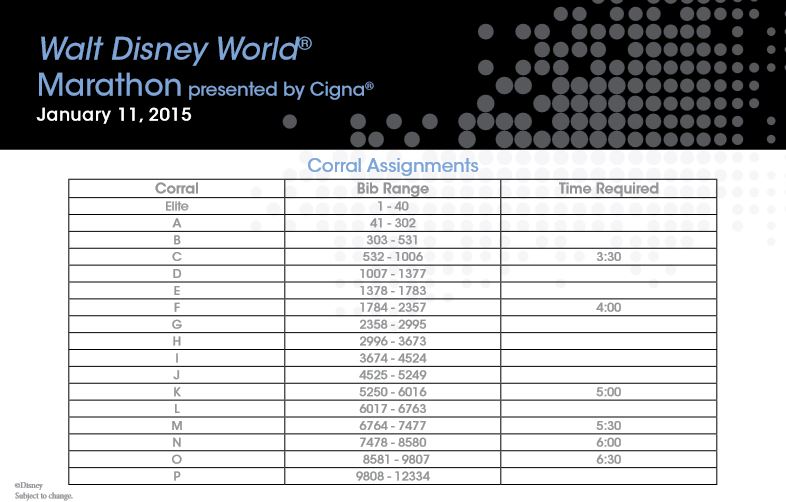 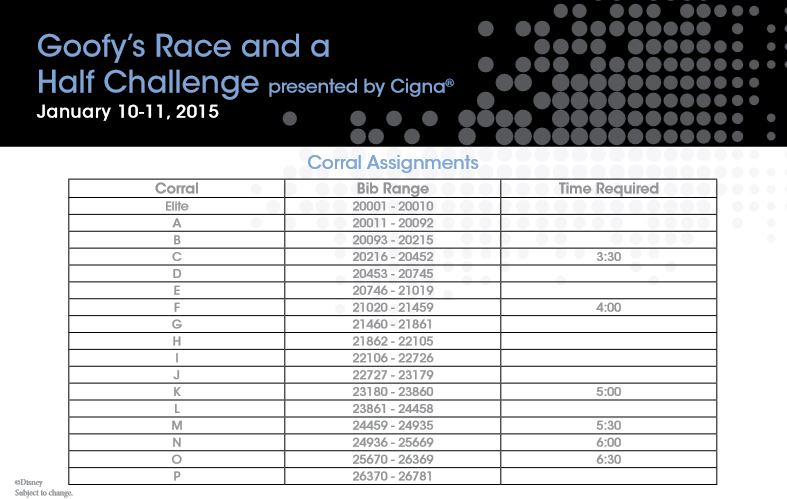 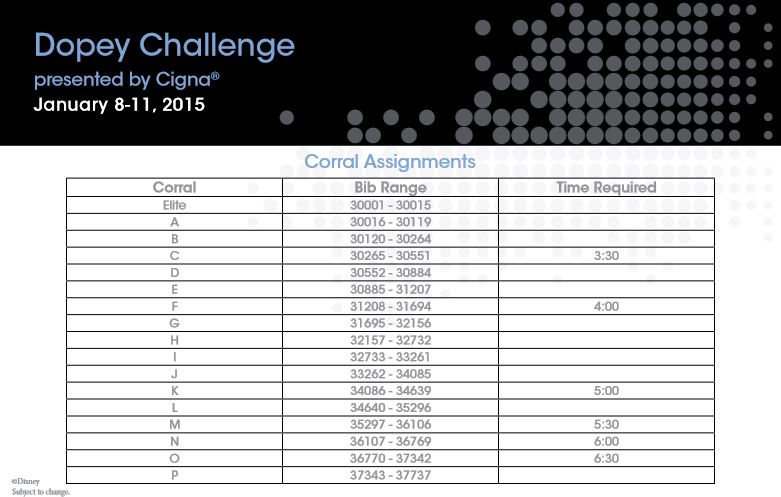 The corrals will be lined up like this and there are more portapotties (and lots of trees) out by the corrals: 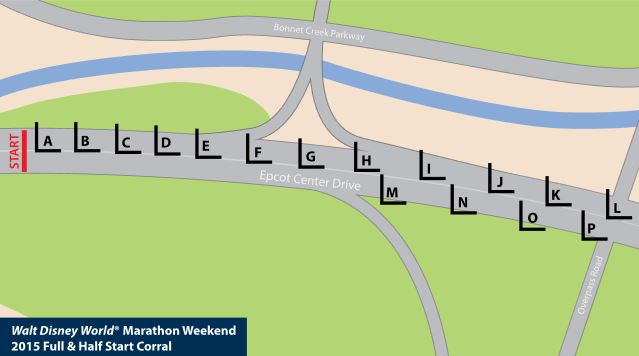 The start is on Epcot Center Drive. There will be a water stop just before the first mile marker. By mile 2, runners will be on World Drive and heading for the Magic Kingdom. Many spectators like to gather &amp; cheer in the first mile as runners are just getting started.

The next water stop will be just inside the Magic Kingdom parking gates, just before the mile 3 marker. Runners will then go through the main parking lot drive towards the Transportation and Ticket Center and out to the right of the TTC heading towards the Contemporary.  Some people think the hill in front of the Contemporary is a tough climb.

There will be a water stop around mile 4. Expect cheering spectators at the TTC and in front of the Contemporary.

Here’s the detail for our route through the Magic Kingdom:

Mile marker 5 will be just before entering the Magic Kingdom and Mile 6 marker will be near Pecos Bill’s in Frontierland. In between those will be the magical moment of running through the castle! Runners will enter Main Street, USA between Chapeau and Tony’s Town Square, head up Main Street, turn right down the Tomorrowland bridge, then left in front of the Tomorrowland Speedway. After running through the castle, we’ll make a sharp right turn to go across the Liberty Square bridge, through Frontierland, and exit the Magic Kingdom by Splash Mountain. Another water stop will come shortly after exiting the Magic Kingdom, just past the mile 6 marker. Spectators are allowed on Main Street and in the hub.

Runners will head up Main Street, turn right down the Tomorrowland bridge, then left in front of the Tomorrowland Speedway. After running through the castle, we’ll make a sharp right turn to go across the Liberty Square bridge, through Frontierland, and exit the Magic Kingdom by Splash Mountain. Another water stop will come shortly after exiting the Magic Kingdom. Spectators are allowed on Main Street and in the hub.

There will be water stops just after the mile 7 and mile 8 markers as well. In this section, we’ll be running on Floridian Way and passing both the Grand Floridian and the Polynesian before heading in for a spin around the Walt Disney World Speedway and the mile 9 marker.  There is a steep incline down & back up as you enter the Speedway.  Expect lots of squeals and slowdowns from other runners there.  After we exit the speedway, there is a tiny patch of grass/mud to cross and there will be another water stop before we begin the long haul to the Animal Kingdom.

This is the longest stretch of course without any water stops – there will be no support between mile 9.25 and 11.5, but when we get to 11.5, there will be bananas waiting. Mile 12 will fall just outside the Animal Kingdom.

We’ll enter the Animal Kingdom backstage near the safari and Kali River Rapids which is a change from past years. We’ll then run through Asia and Dinoland before hitting the halfway point at a water stop just outside the park. After we reach Asia the next several miles of the course will be familiar to those who have run a Wine & Dine Half Marathon or the Tower of Terror 10 Miler. For the Marathon, instead of running the edge of the parking lot, we’ll be swinging in front of the park, going around the bus drop off area, and exiting the way we run IN to Animal Kingdom during the Wine & Dine Half Marathon.

There will be another water stop just after the mile 14 marker followed by a water & Clif Gel stop just after we go over the first overpass. I’ve heard rumors that some folks are planning to detour onto Buena Vista Drive and get a McFlurry at McDonald’s, but I think I’ll hold out for the Clif Gel! The second overpass is just before mile 16. Another water stop will be located at the turn into the Wide World of Sports with another less than a mile later just after the mile 17 marker. This is the stop where sponges will be available.

Here’s the detail for the portion inside the Wide World of Sports:

We’ll hit a water stop and get bananas just after the mile 18 marker. Fluids and Clif Gels will be available at mile 19.4, right when we exit the stadium. Mile 20 will be on Victory Way as we head back to the Osceola Parkway.

At the intersection of Victory Way and the Osceola Parkway, we’ll find another water stop and then we’ll take the ramp onto World Drive as we head for Disney’s Hollywood Studios. Another water stop will be at Mile 22 before we enter the Studios.

Here’s the detailed map for our route through Disney’s Hollywood Studios:

There will be a water stop just before mile 23, then we’ll run the Streets of America, pass the ABC Commissary, pass the giant hat and make our way out of the park. The park will open at 9 AM, so slower runners will find lots of spectators to cheer them on.

We’re in the final stretch! Mile 24 will be just as we go under Buena Vista Drive on the path around the Boardwalk. There will be water stops at mile 24 and just before mile 25 near the International Gateway as we enter our fourth theme park in this adventure.

Here’s the detailed map for the route through Epcot:

We’ll come on stage near the former Millennium Pavilion and then turn right for a loop around World Showcase. Lots of people will be here cheering their runners on.  Some runners may even stop to pick up a beverage before heading to the finish!  At the front of World Showcase, we’ll head for the Fountain of Nations, and then out past the gospel choir to the finish line. I can’t wait to hear my name called as all the months of training finally pay off!