The Family Fun Run 5K will begin at Epcot at 6:15 AM on Thursday, January 8, 2015.  Participants receive a unisex cotton shirt, a finisher medal, access to the digital gift bag, refreshments on the course and after the race, and of course, that fantastic on course entertainment that makes RunDisney events different from any other!

Transportation to the race will begin 4:15 AM from all Walt Disney World resorts.  Participants need to be on a bus before 5:30 AM.  Monorail transportation will begin at 3 AM.

The race will be begin in the Epcot parking lot and will go for over a mile before runners enter World Showcase.  The first water stop will be between Norway and China.  Runners will continue around the World Showcase promenade to the United Kingdom, where they will make a sharp turn and exit the park through the International Gateway.  They’ll move through a backstage area behind the UK pavilion, then re-enter the park near the World Showplace pavilion (the old Millenium Village for those of you who remember Epcot in 1999!)  The second water stop will be in this backstage area.

Runners will move from World Showcase into Future World via the main bridge connecting the two halves of Epcot.  There is a new route to the final half mile of the course.  In previous years runners looped in front of Spaceship Earth going almost to the turnstiles, but this year we will turn at the Fountain of Nations and make a loop in front of The Land before turning back to cross in front of the fountain again and exit the park to the finish line by going between the Universe of Energy and the former Wonders of Life pavilions. 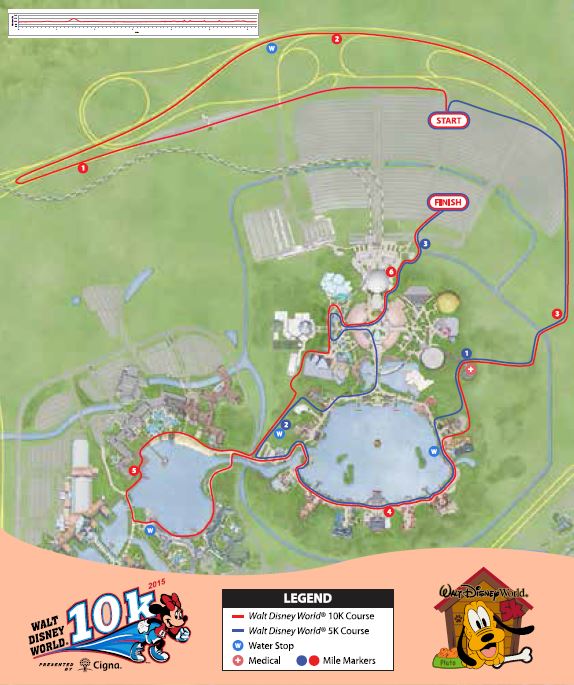