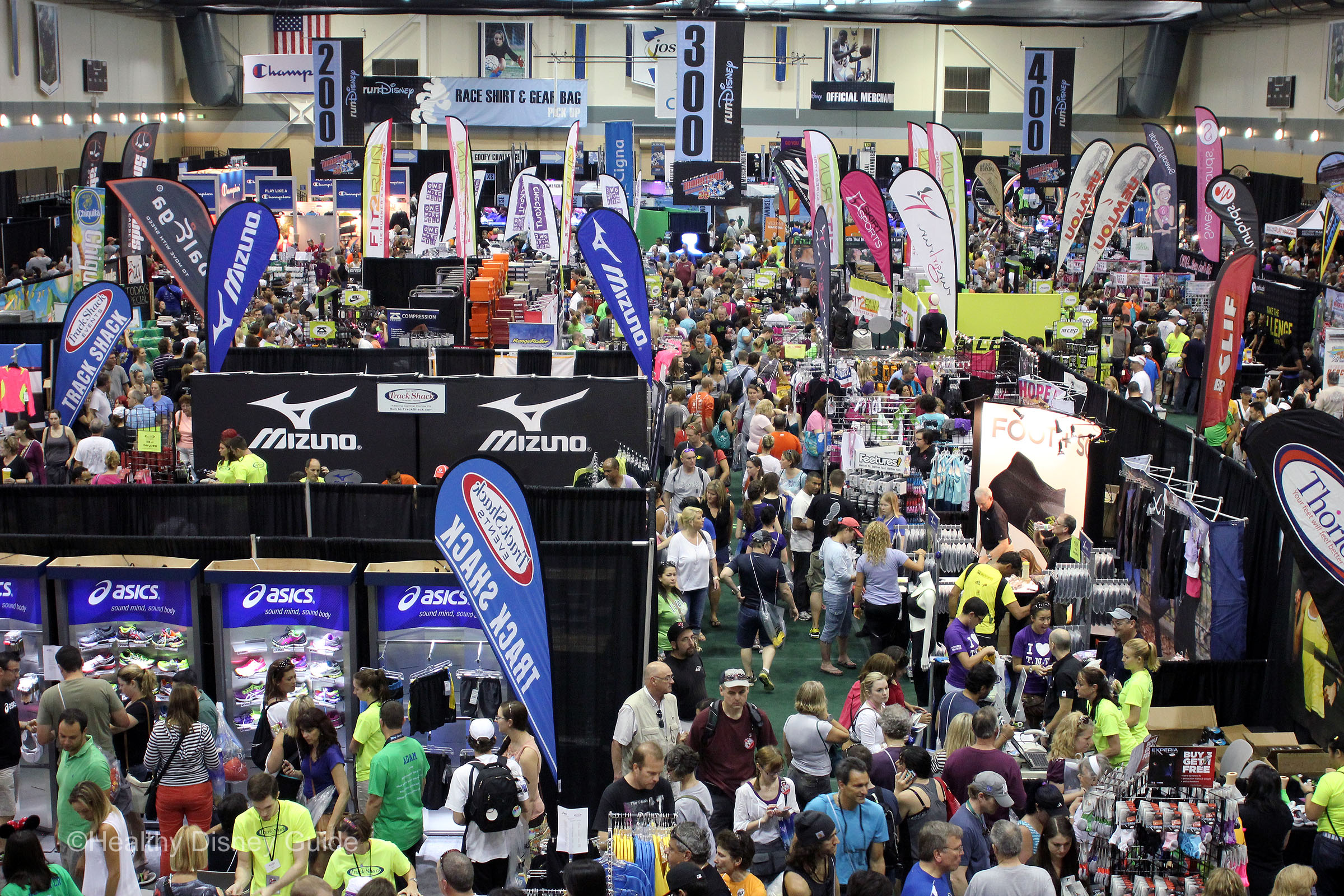 After everything wrapped up at the RunDisney 2013 Marathon Weekend MeetUp, I hurried back to our resort to quickly pick up Paul and the boys so we could head to the Expo and get ready for that day’s running of the Mickey Mile. I knew that Marathon Weekend involved significantly more runners than the Wine & Dine Half Marathon or the Tower of Terror 10-miler, but our experience at the expo proved it. I was not prepared for the CROWDS!

Traffic was backed up most of the way down Victory Way heading into Disney’s Wide World of Sports and none of the drivers seemed to be in a very magical mood. As we sat in the car at 10:45 AM, we actually started to get worried we might not make it in time for the 12:30 running of the Mickey Mile. Once we finally got into the Wide World of Sports complex, we were parked in the far corner of the grass field where the start of the Wine & Dine Half Marathon is staged. I’m not sure we could have been any farther from where we needed to be! Even walking up to the Wide World of Sports was a crowded experience.

We quickly made our way to the HP Field House to pickup our packets. The upper level had the packets for the kid’s races, the Goofy Challenge, and the 5K. Since the Family Fun 5K had already happened, this area was not very crowded. We circled back around and went to the lower level to pick up my marathon packet and Paul’s half marathon packet. There really wasn’t a wait for anything on the lower level other than RunDisney merchandise. I had never seen the speaker’s series in the Field House, it has always been in the Josten’s Center for the other expo’s I’ve attended. We quickly checked to be sure our chips registered with the mats and then headed out to the Josten’s Center for our race shirts.

There was a massive line to even get into the Josten’s Center! I simply was not prepared for this type of crowd. It was overwhelming. We knew we would not have time to get in & out of the Josten’s Center before the Kid’s Races started and it was clear that RunDisney merchandise was already selling out. We went back into the Field House building to see what we could quickly find in the RunDisney merchandise booth there. Paul & the boys got in line while I shopped and then we switched places.

The purple women’s cut tech shirt I’d seen photos of online was nowhere to be found. I ended up with thin long-sleeved white marathon tee, but I don’t like the shirt as well as I like the one I have from the Inaugural Wine & Dine Half Marathon. Love that shirt! Wish Disney would use it again! Paul found a tech shirt for the half-marathon that he liked and we each got a Vinylmation with medals. We quickly paid and shoved all our race packet stuff down in the bag so we wouldn’t lose it, then hurried out to wait for the Mickey Mile to start.

After the Mickey Mile was done, we found the line to get into the Josten’s Center a bit shorter than before. It was around 1 PM that we finally made it in the door.

Have I mentioned that I was in no way prepared for the crushing crowd of people? And the kids were about over it too. We hurried back to pick up our race shirts and quickly searched the RunDisney merchandise booth to see if there was anything different in this building. Half the booth had been emptied out, there just wasn’t much left. I was very surprised since the expo was only halfway over at this point. I guess the runners who go on Saturday don’t get any RunDisney merchandise at all.

Since I’d been at the expo for both the Wine & Dine Half Marathon and the Tower of Terror 10-miler in the past few months, I was ready to leave after a quick stop by the One More Mile booth for a bargain bin shirt and car stickers. Most of the booths were repeats and it was near-impossible to even walk. The boys were definitely ready to go and I’d had all the complaining & whining I could take. As we left and headed up the stairs, we saw the line of shoppers waiting for the remaining New Balance shoes that had been flown in from California that morning. RunDisney and New Balance sure hit a home run with those!

Getting out of the parking lot was much easier than getting in. We dropped our things in the room at Beach Club Villas and were happily into Epcot by 4 PM!