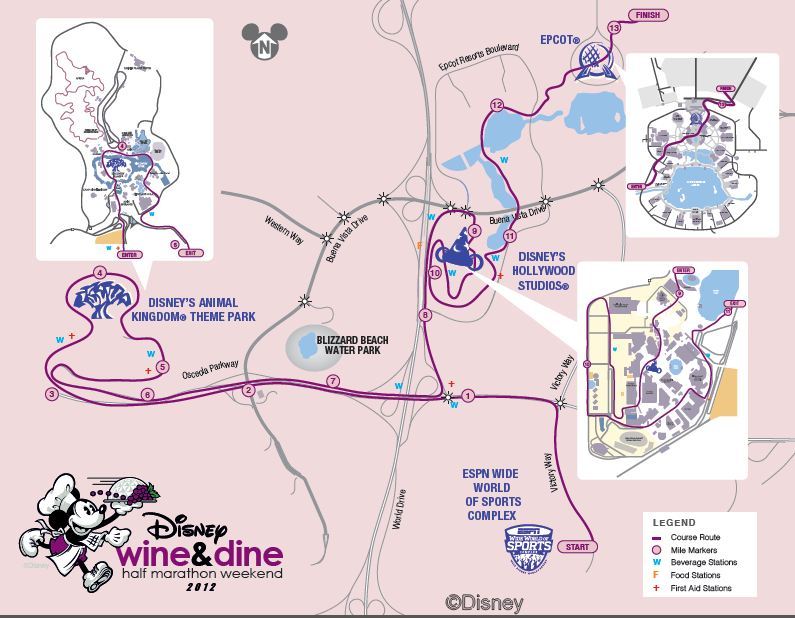 The inaugural Wine & Dine Half Marathon in 2010 was my first ever 13.1 mile race.  It took Disney, food, and wine to get me to move from racing 3.1 to 13.1 miles.  This year’s race will be my seventh half-marathon, and my last before tackling the 26.2 mile distance at Walt Disney World in January 2013.

First, an overview of the entire course:

We’ll start from the parking lot at the Wide World of Sports, head out to the Osceola Parkway, into and around the Animal Kingdom, and back up the Oscola Parkway before taking the ramp onto World Drive.  We’ll take other ramp from World Drive onto Buena Vista Drive before turning into Disney’s Hollywood Studios.  After twisting & turning through Disney’s Hollywood Studios, we’ll exit through the front gate and go around the Boardwalk by the Yacht & Beach Club Resorts before entering Epcot and heading to the finish.

The wheelchair races will start at 9:58 PM and corral A will go at 10 PM with another corral following every 5 minutes.  From the start, it is less than a mile before the left turn onto the Osceola Parkway.  Water stop one will be near mile marker one.  We’ll experience a slight uphill then downhill as we cross over World Drive and again as we cross over Buena Vista Drive right at mile marker two.  Expect either DJ’s or bands and some parade floats in the median of the highway here and possibly a few spectators as we go over Buena Vista Drive.

Curving to the right and taking a slight downhill, we’ll enter the Animal Kingdom parking area at mile marker three.   Near mile 3.5 will be another water stop & medical tent and we’ll be running on sidewalk.  The path will definitely narrow as we head towards the Animal Kingdom bus stop and the park entrance, groups running together should take care not to block the path.

We’ll enter the Animal Kingdom through the left side of the entrance turnstiles and experience a slight uphill as we run through the left side of the Oasis.  We’ll then have the downhill as we go towards the Tree of Life.  Don’t forget to look up and enjoy the view!  This is what you trained for!  We’ll head around to the left of the Tree of Life toward Africa and hit mile marker four just as we leave Africa and enter Asia.  Mile four will take us past Expedition Everest and around to Dinoland.  Wave to the giant yellow dinosaur and to the Brightroom photographers.  We’ll then exit the Animal Kingdom through a backstage area, find another water & medical stop and hit mile marker number five.

The past two years, this race has included a relay split into 5 miles & 8 miles and the transition point has been right here, just after exiting the Animal Kingdom.  I’m accustomed to hearing a DJ playing music and updating runners with football scores, but I’m unsure if he’ll be there this race since the relay option has been discontinued.  I’ll miss the DJ if he’s not there, but I won’t miss being constantly passed by fresh runners as they take off for their leg of the relay!  Most teams put the stronger, faster runner on the second, longer leg and it was tough to get passed that much when I was an hour into my race.

Mile five will be mostly in the Animal Kingdom parking lot and entrance roads (“Caution runners!  Speed bumps ahead!”) and then we’ll be back on the Osceola Parkway until about mile 7.5.  Faster runners will see the slower runners and walkers on the other side of the road.  This has been a spot where I’ve started to struggle in the past.  Runners are really starting to spread out, it’s dark and it’s a bit uphill around mile 6.  There will be a water stop just before we take the ramp onto World Drive.  There is NO out & back portion before turning left onto World Drive, just the turn and the ramp.

We’ll only run on World Drive for about a mile, but runners should know we’ll be in the right lane, the middle lane will be blocked off, and traffic will be moving by at 55 miles an hour in the left lane.  Another water stop and the only food stop on the course will be just as we take the ramp to move from World Drive to Buena Vista Drive.  In 2010 the food was Clif Shot Bloks and in 2011 it was Clif Energy Gels.

We’ll run down Sunset Boulevard, turn right onto Hollywood Boulevard, wave at the giant hat, then go through the gate toward Animation Courtyard and turn left onto Mickey Avenue through Pixar Place.  We’ll then loop through some of the backstage area along with the Backlot Tour attractions.  Mile Marker 10 will fall in here with a water stop just before it.  Expect your Garmin to lose signal inside the costuming tunnel and under the Backlot Tour tram station.  We will not be running across the stage at Lights, Motors, Action as in years past, so I’m glad to got to do that during the Tower of Terror 10 Miler last month.  However, we will run up the Streets of America and the Osborne lights will be on.

We’ll head around Star Tours, then end up backstage again as we go between the back of the Indiana Jones theater and the cast costuming area.  A medical stop & water stop will be here.  After crossing over Hollywood Boulevard and going around the back of the stroller & wheelchair rental building, we’ll exit the park and make our way towards the Boardwalk.  Take caution in this area, I’ve seen runners fall after slipping on the metal protectors placed where the palm trees meet the sidewalk.  Mile Marker 11 will be here.

With just 2 miles to go, we’ll be going under Buena Vista Drive as we run alongside the water.  This is another narrow sidewalk area and it can get crowded.  I’ve struggled in this area both years.  Mile Marker 12 will come just as we reach Stormalong Bay at the Yacht & Beach Club.  There are usually a fair amount of spectators out here cheering, which is a nice pick-me-up for the last mile of the race.

We’ll run toward the International Gateway into Epcot, yes, up that hill and then down again.  As we turn left, everyone who ran in 2010 will remember the finish line being here, but we’ll have three-quarters of a mile still to go.

We’re going to run behind the old Millennium Village building up to Avenue of the Stars.  In the 2011 race, we turned left and continued backstage to reach the finish near the Epcot bus stop.  This year, we’ll turn right, run between the Soarin’ show building and the Imagination Pavilion, go through Innoventions, and around the Fountain of Nations before ducking backstage to get to the parking lot and the finish.

It looks like we’ll finish right inside the corner of the front parking lot and that bag pickup and changing tents will be located inside that “runners only” area, which I like.  2011’s race finish area was a vast improvement from 2010 and I think this will be just as good.  I am beyond excited to run this race with my friends in just a few days!