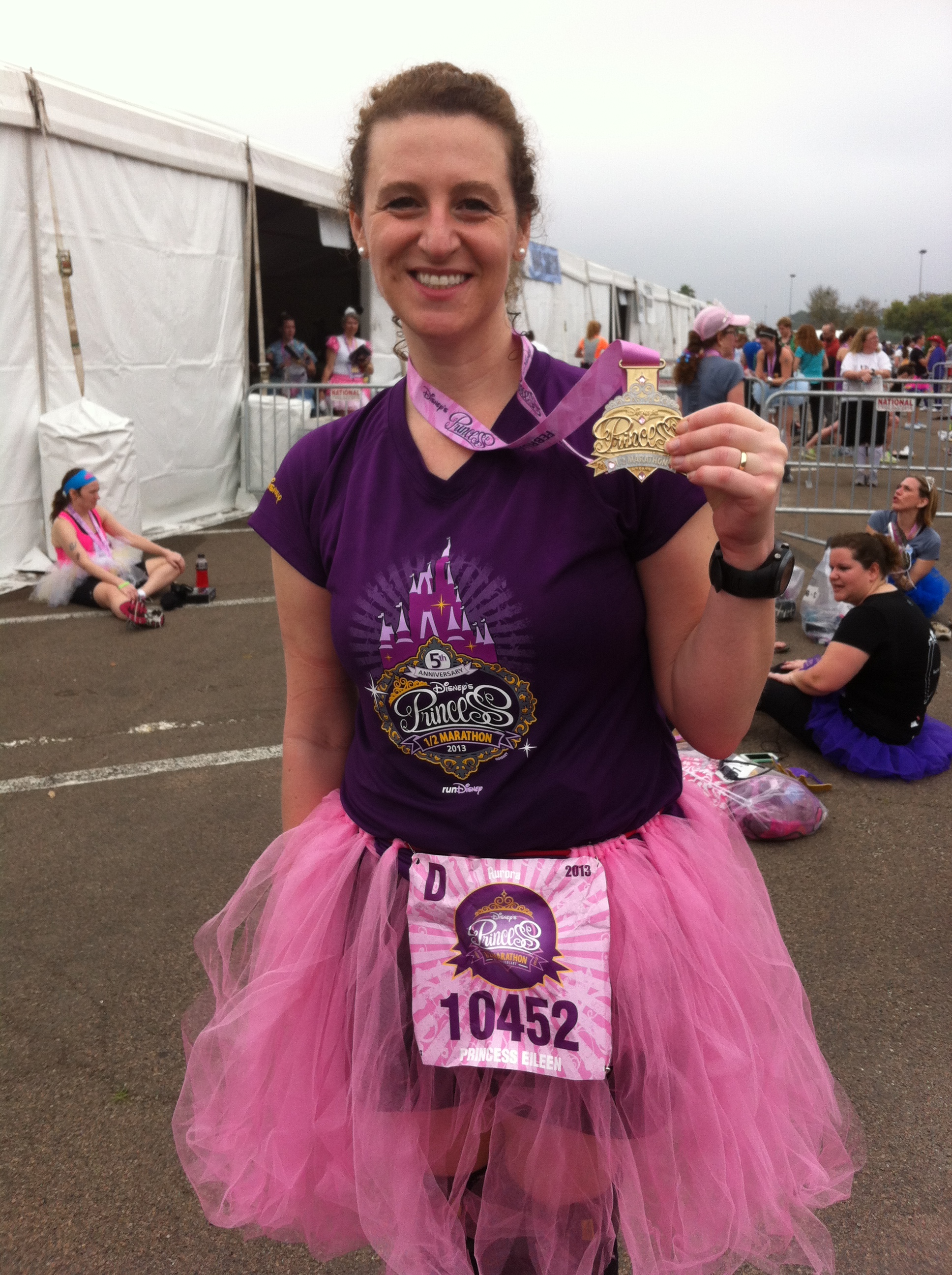 Here’s a race report from RunDisney Princess Half Marathon Weekend by Eileen:

Race Report for Princess Half Marathon/ Royal Family 5K weekend 2013
I was excited to go down with two girlfriends for the Princess and the Royal Family 5K.  I ran the Princess last year and two Wine and Dine Half Marathons so I had some idea of what to expect. We decided to stay at Coronado Springs since that is where the race expo was.  It turns out that it was a great decision.

Race Expo Friday:
Friday morning we ate breakfast in the food court then walked to the convention center around 8:45 am.  When we got there the line to get in was all the way down the hallway.  We noticed another line that extended outside.  We found out later that it was for the New Balance runDisney Shoes.  Apparently people had been in line since 3:30 for them!  The doors opened at 9:00. The set up seemed to be somewhat familiar to most of the other races, just in a different room.  We headed straight over to the runDisney merchandise section and and bought our “I did it!” shirts first.  This turned out to be a great idea because by the time we left there was a huge line to just get in to the runDisney merchandise area.  Packet pickup and shirt pickup went smoothly with no lines.  However, the line for the runDisney shoes kept getting longer and longer with Disney employees eventually putting masking tape on the floor to form a makeshift queue line.  This year we got a really cute pink Princess drawstring backpack in our race packets. We were back in our room by 10:30 to drop off our things and then we set out for Animal Kingdom for the day.  It worked out great for us.

Saturday / Royal Family 5K:
I woke up at 5 am, put on my pink tutu and my tiara.  Then my friend, Anne, and I boarded a bus at 5: 30 to make our way over to EPCOT.  The race started with fireworks and most people were dressed in costume.  We saw kings, frogs, princesses, and villains.  Since I was running the Princess the next day I walked the entire way and had a great time people watching and took several pictures.  At the end we got our medals, medal picture and snack box.  Then we hopped on a bus to the Swan and Dolphin and took a boat to Hollywood Studios for some morning extra magic hours.  We later went to EPCOT for a big carbohydrate loaded lunch/dinner at Via Napoli in the Italy Pavilion.  I got the spaghetti and meat balls and it tasted wonderful.

Sunday / Princess Half Marathon:
My friend, Sheryl, and I boarded our bus at 4:30 in the morning and headed over to EPCOT.  I wore my pink tutu, but forgot my tiara.  Sheryl wore a yellow tutu and Bell themed apron.  I ate a protein bar and drank a bottle of water on the way over.  We checked our bags, got in line for the port-o-potty and started walking to our corral.  The walk to the corral took at least 20 minutes and it was wall to wall people the whole way.  We finally saw a light off in the distance and heard loud music so we knew we were close.  We were assigned to corral D so we made our way in there.  One of the suggestions Disney offered in our race guide was to start at the back of the corral so you wouldn’t have to start in the middle of everyone.  We tried that and I wouldn’t recommend it.  I ended up having to push through everyone in my corral.  There is usually crowding in the beginning of the race, but by starting in the back of the corral I basically put more slow people in front of me.  Bad decision.
From the beginning it was very obvious that this race was way more crowded than any Disney race I’ve been in.  There were only a few places that thinned out enough for real running.  I ended up walking a lot more than I intended because I simply could not go anywhere.  People were running on the grass and twisting their ankles.  I saw several medics treating people in the grass.  Some people where jumping cones to run in the lanes that had car traffic. I even saw a runner hit by a car.  It was between the halfway mark and the gel shot station.  The course was down to one lane and runners were packed in like sardines.  A taxi van was going down the lane open to traffic and then it slowed down for some reason.  A runner was either trying to jump the cones or was tripped. I did not see what happened exactly for her to get on the other side of the traffic cones.  But, the runner hit the side of the van and went down.  I heard the loud thump through my earphones.  Someone screamed and people started yelling for a medic.   I could see that the person was sitting up and wearing a blue shirt, but beyond that I couldn’t see anything else.  People were gathered all around her.  I never heard the status of the runner or saw any news reports about it.
After the car accident I stopped stressing so much about the race congestion slowing me down as I realized there were more important things in life.  The rest of the race went without incident. The congestion of runners on the course continued.  A lot of people were complaining about the heat, but I was more focused on all the walkers blocking the course.  I literally ran most of the race looking at the ground so I wouldn’t trip.  After the race my Garmin said I had run 13.6 miles.  It had my pace at a disappointing 13:15 min/mile.  My training pace had been at a 12:00 minute mile.  The congestion of runners had a major affect on my time and pace.  All in all though it was fun and really neat to be a part of such a fun weekend!  The medal was extra cute!