My family didn’t pay much attention.  We had friends running and we saw a few photos on Facebook, but really, the final year of this event passed with little comment in our house.  We were too busy with all the things that were added to our lives when Paul and I ran the inaugural race. 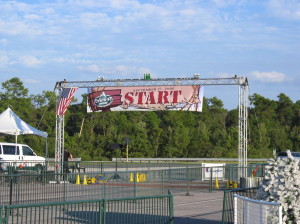 We literally started running so we could participate in the Inaugural Expedition Everest Challenge in September 2008.  We planned a Walt Disney World vacation for that September.  It was the last fall before the boys would begin kindergarten and we wanted to go without worrying about school schedules.  That spring I heard about this crazy thing that Disney Sports was putting on – a 5K race with an obstacle course and a scavenger hunt.  We’d never really run before, but surely we could work up to 3 miles, right?

So we started the Couch to 5K running plan.  For me, it was hard.  I started on the treadmill at our gym and had to repeat several weeks.  I know it took a few attempts to finish that first 20 minute run for week 5, day 3.  Paul did a little better and he promised he’d stay with me during the race.  We ran one local 5K that summer, a small one.  I know I finished exactly 6 people from the end and was cursed at during the race by an injured runner who was unhappy he was getting passed by a “fat soccer mom”.

September came and we had a wonderful vacation and a great time at the Expedition Everest Challenge.  Finishing that race was only the beginning of our journey.  Many other start lines have come and gone.  I’ve completed 18 half marathons, including all five RunDisney Wine & Dine events, and 5 marathons, including two Dopey Challenges.  Paul has finished 17 half marathons and 3 marathons, two of them holding my hand as we crossed the finish line of the Dopey Challenge.

This September, eight years after we ran the inaugural Expedition Everest Challenge, we’ll earn our first RunDisney Coast to Coast medals as we complete the Dumbo Double Dare at Disneyland Resort.  The little four-year-old boys we left in the Cub’s Den childcare at the Wilderness Lodge for that night in September 2008 are now eleven and starting middle school next year.  They will finish their first 10K race with us at the Disneyland 10K this fall.

Even more life-changing than finishing the races and earning the medals are the people and opportunities that running has brought into our lives.  Runners are wonderful folks.  We take care of each other.  We are happier, healthier, and surrounded by runner friends that we love.  I have many RunDisney travel clients who trust me with their vacations since they know I’ve BTDT with almost every RunDisney race weekend.  Paul found a group to run with at work that has not only helped him get FAST, but is bringing new and exciting work opportunities to us as well.

So, thank you, Expedition Everest Challenge.  We didn’t know it then, but you were one of the best things that ever happened to us.  Thank you.  Farewell.