It’s finally here!  The 2014 RunDisney Wine and Dine Half Marathon!  I’m so excited to be running this race for the fifth time and can’t wait to see what RunDisney has in store for us “Perfect Winos”.

Let’s take a look at the course maps.  First, an overview of the entire course: 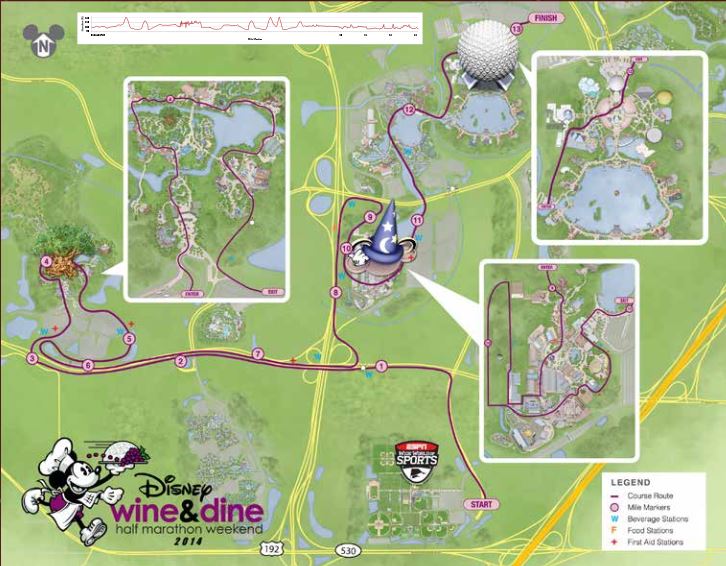 We’ll start from the parking lot at the Wide World of Sports, head out to the Osceola Parkway, into and around the Animal Kingdom, and back up the Oscola Parkway before taking the ramp onto World Drive. We’ll take other ramp from World Drive onto Buena Vista Drive before turning into Disney’s Hollywood Studios. After twisting & turning through Disney’s Hollywood Studios, we’ll exit through the front gate and go around the Boardwalk by the Yacht & Beach Club Resorts before entering Epcot and heading to the finish.

This race has certainly changed since the first year when there were four corrals and about 10,000 runners.  Here’s the corral/bib number breakdown. 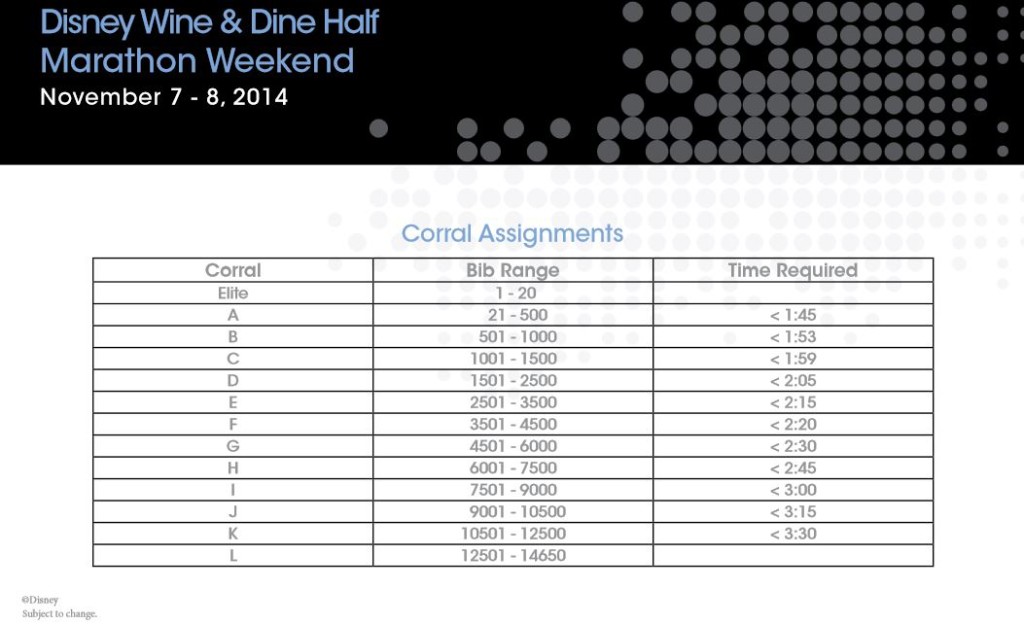 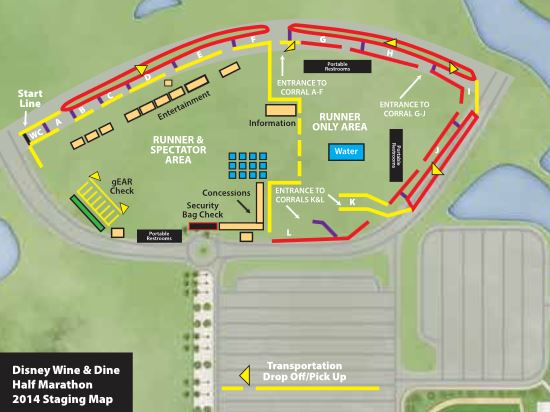 From the start, it is less than a mile before the left turn onto the Osceola Parkway. This section will be very crowded.  Water stop one will be near mile marker one. We’ll experience a slight uphill then downhill as we cross over World Drive and again as we cross over Buena Vista Drive right at mile marker two. Expect either DJ’s or bands and some parade floats in the median of the highway here and possibly a few spectators as we go over Buena Vista Drive. 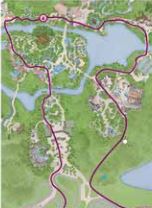 Curving to the right and taking a slight downhill, we’ll enter the Animal Kingdom parking area at mile marker three. Near mile 3.5 will be another water stop & medical tent and we’ll be running on sidewalk. The path will definitely narrow as we head towards the Animal Kingdom bus stop and the park entrance, groups running together should take care not to block the path.

We’ll enter the Animal Kingdom through the left side of the entrance turnstiles and experience a slight uphill as we run through the left side of the Oasis. We’ll then have the downhill as we go towards the Tree of Life. Don’t forget to look up and enjoy the view! This is what you trained for! We’ll head around to the left of the Tree of Life toward Africa and hit mile marker four just as we leave Africa and enter Asia. Mile four will take us past Expedition Everest and around to Dinoland. Wave to the giant yellow dinosaur and to the Brightroom photographers. We’ll then exit the Animal Kingdom through a backstage area, find another water & medical stop and hit mile marker number five.

Mile five will be mostly in the Animal Kingdom parking lot and entrance roads (“Caution runners! Speed bumps ahead!”) and then we’ll be back on the Osceola Parkway until about mile 7.5. Faster runners will see the slower runners and walkers on the other side of the road. This has been a spot where I’ve started to struggle in the past. Runners are really starting to spread out, it’s dark and it’s a bit uphill around mile 6. There will be a water stop just before we take the ramp onto World Drive. There is NO out & back portion before turning left onto World Drive as there was in the early years of this race, just the turn and the ramp.  This is where you’ll find Sarge from Toy Story helping to motivate you up the steep incline.

We’ll only run on World Drive for about a mile, but runners should know we’ll be in the right lane, the middle lane will be blocked off, and traffic will be moving by at 55 miles an hour in the left lane. Another water stop and the only food stop on the course will be just as we take the ramp to move from World Drive to Buena Vista Drive. On the menu at the food stop is Clif Shots.

The Buena Vista Drive section is only about a quarter of a mile, then we’ll enter Disney’s Hollywood Studios through a backstage entrance near Tower of Terror.  Mile marker nine will come near the Tower of Terror. 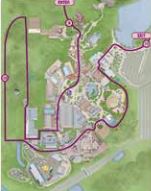 We’ll run down Sunset Boulevard, turn right onto Hollywood Boulevard, wave at the giant hat, then go through the gate toward Animation Courtyard and turn left onto Mickey Avenue through Pixar Place. We’ll then loop through some of the backstage area along with the Backlot Tour attractions. Mile Marker 10 will fall in here with a water stop just before it. Expect your Garmin to lose signal inside the costuming tunnel and under the Backlot Tour tram station. We will run up the Streets of America and the Osborne lights will be on. It’s beautiful!

We’ll head around Star Tours, then end up backstage again as we go between the back of the Indiana Jones theater and the cast costuming area. A medical stop & water stop will be here. After crossing over Hollywood Boulevard and going around the back of the stroller & wheelchair rental building, we’ll exit the park and make our way towards the Boardwalk. Take caution in this area, I’ve seen runners fall after slipping on the metal protectors placed where the palm trees meet the sidewalk. Mile Marker 11 will be here.

With just 2 miles to go, we’ll be going under Buena Vista Drive as we run alongside the water. This is another narrow sidewalk area and it can get crowded. I’ve struggled in this area in the past.  Sometimes there is a DJ or a band on a pontoon boat in the water for entertainment.  Mile Marker 12 will come just as we reach Stormalong Bay at the Yacht & Beach Club. There are usually a fair amount of spectators out here cheering, which is a nice pick-me-up for the last mile of the race.

We’ll run toward the International Gateway into Epcot, yes, up that hill and then down again. 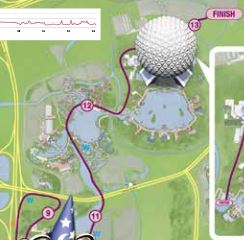 We’re going to run behind the old Millennium Village building up to Avenue of the Stars. We’ll turn right, run between the Soarin’ show building and the Imagination Pavilion, go through Innoventions, and around the Fountain of Nations before ducking backstage to get to the parking lot and the finish.

We’ll finish right inside the corner of the front parking lot and bag pickup will be located inside that “runners only” area.  This year the changing tents will be outside of the runners only area.  After runners collect their medal, food, and checked bags, the party begins!!! 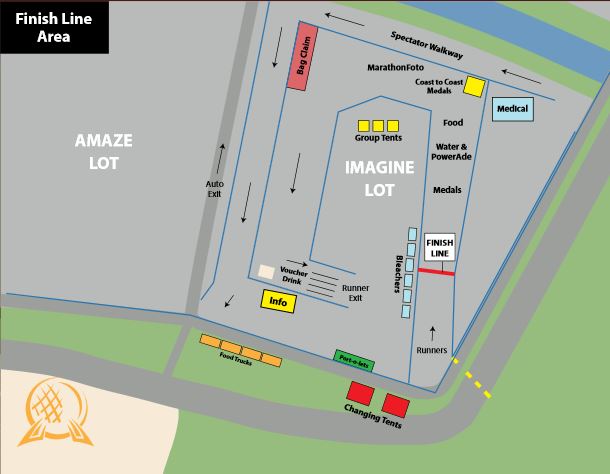